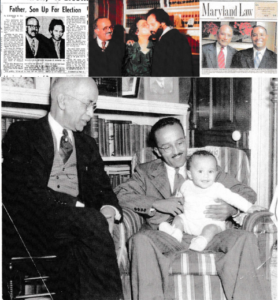 Judge William Billy Murphy, Jr., was 14 when he first started organizing in his community. In 1950s Baltimore, an incinerator in the historically African American community of Cherry Hill was posing a public health crisis in the neighborhood. Residents’ calls for action were routinely dismissed by the prevailing city powers, but thanks to young Judge Murphy’s restless organizing, the incinerator closed less than a year after he became involved. This incident speaks volumes about the kind of attorney Mr. Murphy was to become.

A fighting spirit for justice is in his blood. His father, William H. Murphy, Sr., was one of the first African American judges to preside in Baltimore, as well as the state of Maryland. The elder Murphy was a staunch civil rights supporter and a test case for integration at the University of Maryland Law School.

“Even as the son of a judge, segregation was an up-close-and-personal thing for me,” says Judge Murphy. The injustices that he experienced as a young man were formative, inspiring him to undertake a lifelong fight for the rights of under-represented communities.

After a pioneering career as an undergraduate engineering student at the Massachusetts Institute of Technology and, later, at a leading aerospace company, Judge Murphy decided to continue his family’s heritage of service through the legal profession back home in Baltimore. In 1966, he entered the University Of Maryland School Of Law.

After 10 years of building a thriving practice as a superstar attorney, he ran for judge of the Circuit Court for Baltimore City in 1980. He successfully held this role for three years before deciding to return to his true passion as an attorney in 1983. Judge Murphy has been perfecting his craft in litigation ever since.

In 2004, Judge Murphy received the Charles Hamilton Houston Award for Lifetime Achievement in Litigation. The Baltimore Sun has profiled him as one of the top five lawyers in the state and wrote that he is recognized by his peers as “extraordinarily gifted” and “one of the best defense attorneys of his time.”

A PORTION OF THE PROCEEDS BENEFIT:
WILLIAM AND MADELINE MURPHY SCHOLARSHIP AT THE UNIVERSITY OF MARYLAND SCHOOL OF LAW.

THE HONORABLE WILLIAM H. & MADELINE W. MURPHY IS A 501(c)(3) NON-PROFIT ORGANIZATION. YOUR CONTRIBUTION IS TAX-DEDUCTIBLE TO THE EXTENT ALLOWED BY LAW.